After four years of hard work, I defended my thesis [1], of which the summary is included below, on 17 September. I experienced the day of the defence as a great day. It was very nice to see so many of my family, friends and colleagues. Thank you! 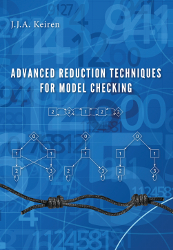 Modern-day software systems are highly complex, and typically consist of a number of interacting components running in parallel. Verification methods aim to prove correctness of such systems. Model checking is a commonly used verification technique, in which a model of the system under investigation is created. Subsequently, it is checked whether this model satisfies certain properties.

Model checking suffers from the infamous state space explosion problem: the number of states in a system grows exponentially in the number of parallel components. Part of the blow-up is also due to the presence of data in descriptions of model checking problems. Typically model checkers construct the full state space, causing the approach to break down already for a small number of parallel components. Properties are then checked on the state space, either directly, or by first combining the state space with a property, leading to, for example, a Boolean equation system or a parity game. The latter step leads to a further blow up.

In this thesis techniques are developed to counter this state space explosion problem in (parameterised) Boolean equation systems and parity games. The main contributions are as follows:

You May Also Enjoy

On Games and Simulations

This is a guest blog by Hans-Dieter Hiep, a student from Vrije Universiteit Amsterdam who worked with me to build a GUI for our work on game-based (bi)simula...

A MOOC on system validation is born

Exciting news! Today the MOOC on system validation that I have developed with Mohammad Reza Mousavi from Halmstad University has started. The MOOC is based o...

Recording a MOOC on System Validation: Some Experiences

Recently I visited Halmstad University Together with Mohammad Mousavi, we recorded a MOOC (Massive Open Online Course) on the subject of system validation. T...

This is just a quick note about WSFM/BEAT 2015. The submission deadlines have been extended by a couple of days, so you can still submit.