This is a guest blog by Hans-Dieter Hiep, a student from Vrije Universiteit Amsterdam who worked with me to build a GUI for our work on game-based (bi)simulations. The tool described in the post is available through BitBucket, see https://bitbucket.org/jkeiren/game_based_simulation/branch/hans-java.

Update 20/3/2017: Hans-Dieter has now also started his own blog, and reblogged the post here.

In this blog post, I would like to report on a relatively short but productive project with Jeroen Keiren and Tim Willemse. Let’s call the result of this project the Bisimulation Games tool. Work began on this project in the summer of 2016. In particular, this post covers the project’s set-up and architectural choices, serves in a small part as a promotion of the idea to do more interactive visualization of theoretical concepts in computer science, and also contains a sneak-preview of another project that replicates the most important design choice of this project.

In particular, this post does not cover the theory behind the tool in depth. We will see games for checking bisimulation and a short introduction how the application handles a particular scenario. For a more thorough background, see [1]. 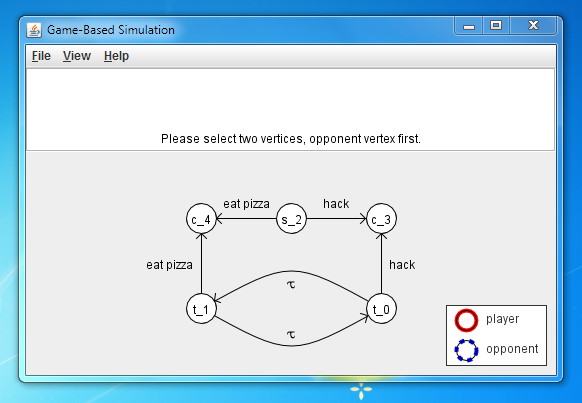 An important aspect of this project is the interactive visualization of games for showing bisimulation relations. We work with Labelled Transition Systems (LTS) here: an abstract representation of the state space of, for example, computer programs. Another example can be seen in the window of the application (above) we have five states: $t_0$ and $t_1$, $s_2$ and $c_3$ and $c_4$. Between states we have transitions: these represent observable actions (eat pizza and hack) or internal actions (so-called tau).

David de Frutos-Escrig, Jeroen Keiren and Tim Willemse have worked towards a definition of a game semantics for showing a number of bisimulation relations. In particular, as part of this project, Keiren has implemented game semantics for bisimulation, branching bisimulation and branching bisimulation with explicit divergence as a Haskell program. This program defines the game state space and game state transitions. Using these two definitions one can determine whether, given a vertex, either a winning strategy exists for either the player or for the opponent.

An important part of this project is to reuse this existing implementation. Here, an important design decision was made: to port the Haskell code to Frege, a Haskell implementation for the Java Virtual Machine. This allowed me to write the visualization and interaction with games in the Java AWT/Swing framework. The Frege project can be still considered experimental, as exemplified by a minor compiler bug that was found and fixed during the execution of this project.

The next step in the project is strategy extraction. The existing Haskell implementation by Keiren provided an implementation for an algorithm for extracting the set of winning vertices for each player of the game: Spoiler (played by the computer) and Duplicator (played by the human operator). For an interactive application, a set of winning vertices is not enough: a human operator can take a step that would ultimately lead to her defeat, even if a winning strategy for Duplicator exists at that point. Thus, an extraction algorithm was developed that, from the set of winning vertices, determines a strategy (assigning to a vertex the best next move) for Spoiler, that is guaranteed to eventually win if a winning strategy for Spoiler exists. This part is not proved and only tested informally, but seems to work fine for the tested examples.

An important aspect is helping human operators discover flaws in their models. The application may act as a “debugger’, showing a step-by-step walkthrough of counter-examples that may help humans understand the model. Let us see an example, that is taken from Korver (see [16] in [1] mentioned earlier). 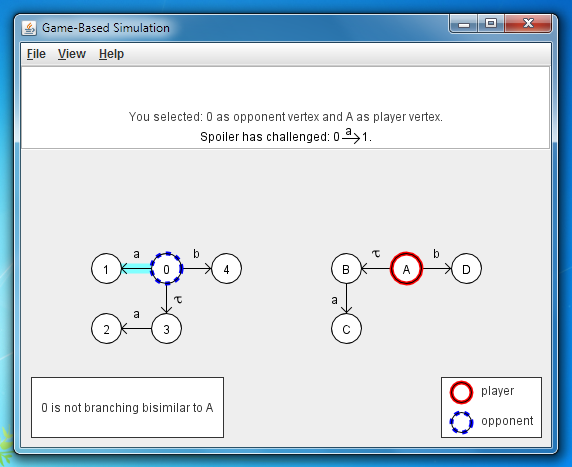 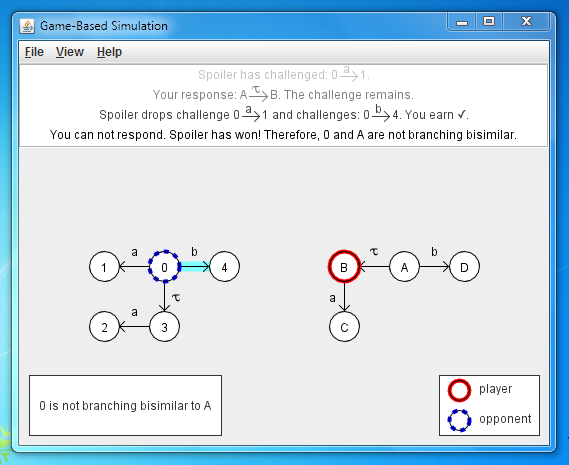 Suppose the user selects the node 0 (blue, left image) as opponent and $A$ (red, left image) as player vertex. Remark that this is also logged in the message pane, on top of the window. First, the winning vertices are computed by the algorithm by Keiren (and shown in the lower left corner: the expected game outcome if both players play according to a winning strategy). Then a strategy is extracted, and the first step is taken: Spoiler challenges Duplicator to mimic the action $a$, as highlighted in blue.

Consequently, the human operator must choose an internal action ($\tau$ to $B$), since the other action ($b$ to $D$) does not match the challenge. Then the Spoiler drops the challenge (second to last message, right image), and challenges Duplicator with a new action: from $0$ to $4$, mimic action $b$. Since Duplicator sits still in the new state of $B$, it cannot undo the $\tau$ step. Hence, the game is concluded: Duplicator has lost, and indeed, no winning strategy for Duplicator exists for these two starting nodes.

One interesting problem encountered during the execution of the project was a bug in the Haskell framework code, that I introduced because of a misinterpretation and misunderstanding of Büchi games. The game semantics is defined as a Büchi game. Such games may have infinite plays.

To help finding the source of the problem, a monad was developed that keeps track of function context that is threaded through the functional code. For example, it dumps the current labeling of some vertex set each iteration of a function. Then a GUI was developed that tracks and shows, for each step, the current state of the function. This allowed me to find where the problem was located. The bug was found to have mixed up Büchi objectives and co-Büchi objectives in the complements of winning vertex sets, having not fully understood the duality.

The same debugging monad (and the corresponding table UI with minor adaptions) were later reused to debug the strategy extraction algorithm. These tools seemed to be of good use during the development.

The project was executed in 4 weeks. This short timespan ensured that only the most important aspects were touched. However, to make the project more worthwhile in the (near) future, it seems useful to explore even more bisimulation relations.

Although the current version of the tool is a fun toy to show simple models, there are numerous downsides: it is slow in execution (Frege is not the most efficient Haskell implementation), it may contain bugs or flaws in the GUI code, and the strategy extraction may be wrong. To extend the tool for more relations, one has to adapt both the GUI code and the simulation framework. And, finally, only I have worked on the GUI part of the application, so the code is ugly or unclear for others to work with.

However, it seems that the architectural choice (of writing the core of the application in Haskell/Frege and use only Java for interactivity and visualization) is a good one, for several reasons: first, the system is naturally split in two parts and needs to have a well-defined interface between these parts. That increases clarity of thought. Secondly, Haskell seems a better suited language for defining state spaces and transitions (especially thanks to the List monad) than Java. And Java has a lot of client installations and includes a GUI toolkit out-of-the-box. With this choice one has the best of both worlds.

Indeed, to verify this architectural choice, I have worked on a “spiritual successor” of this project over the past few weeks, that culminated in a new tool. The new tool, let’s call it the Distributed Algorithms tool, allows users to explore all possible executions of some built-in algorithms on a user-defined network. This project was supervised by Wan Fokkink.

The framework behind the Distributed Algorithms tool allows several basic distributed algorithms (for example Cidon’s traversal algorithm, see image) to be defined using a simple process algebraic framework. This framework allows one to specify the algorithm in terms of a state space, a message space and a local transition function with basic actions: sending, receiving, internal. Compare this with the game state space, game state transitions of the Bisimulation Games tool.

In the Distributed Algorithms tool, more effort and focus than before went into cleaner and better organized GUI code. Also with this project, the bulk of work is done within 4 weeks. However, one of the downsides of the above architectural choice became apparent: there is significant overhead in programming time spent translating Java objects to and from Frege’s compiled Haskell objects.

All in all, I believe that these visualization and simulation projects are fun ways of exploring theoretical concepts. A visualization is often burdensome to write, but I believe it pays off the effort in the long run. Visualization tools allows users (including its authors) to explore theoretical concepts on a different level. It may be tedious for some concepts to work out examples manually, and visualizing them solves that problem. Interactivity makes the concepts even more alive: it allows users to experiment with the theory without knowing the formalization behind it, and may serve as an easy introduction into a new field of study.

As a programmer, the practical nature of the tools required a good understanding of the subject matter, and some creativity to correctly implement and visualize them. As was mentioned, errors were made because of misunderstanding or misinterpretation. It seems one has to be patient (e.g. by building debugging tools) to solve one’s own problems. At the same time, one needs a certain amount of rigor to prevent introducing problems in the first place.

Finally, the choice to work with both the Java language and the Haskell language is an interesting one. I hope to work more on these kinds of projects in the near future: short in duration, diving deep in theory, and (re)presenting the results interactively as a tool that is hopefully pleasant to use.

Table overview of relative size of projects. * includes work by Keiren **not yet finished.

You May Also Enjoy

A MOOC on system validation is born

Exciting news! Today the MOOC on system validation that I have developed with Mohammad Reza Mousavi from Halmstad University has started. The MOOC is based o...

Recording a MOOC on System Validation: Some Experiences

Recently I visited Halmstad University Together with Mohammad Mousavi, we recorded a MOOC (Massive Open Online Course) on the subject of system validation. T...

This is just a quick note about WSFM/BEAT 2015. The submission deadlines have been extended by a couple of days, so you can still submit.